How has AI influenced the Patent Industry? 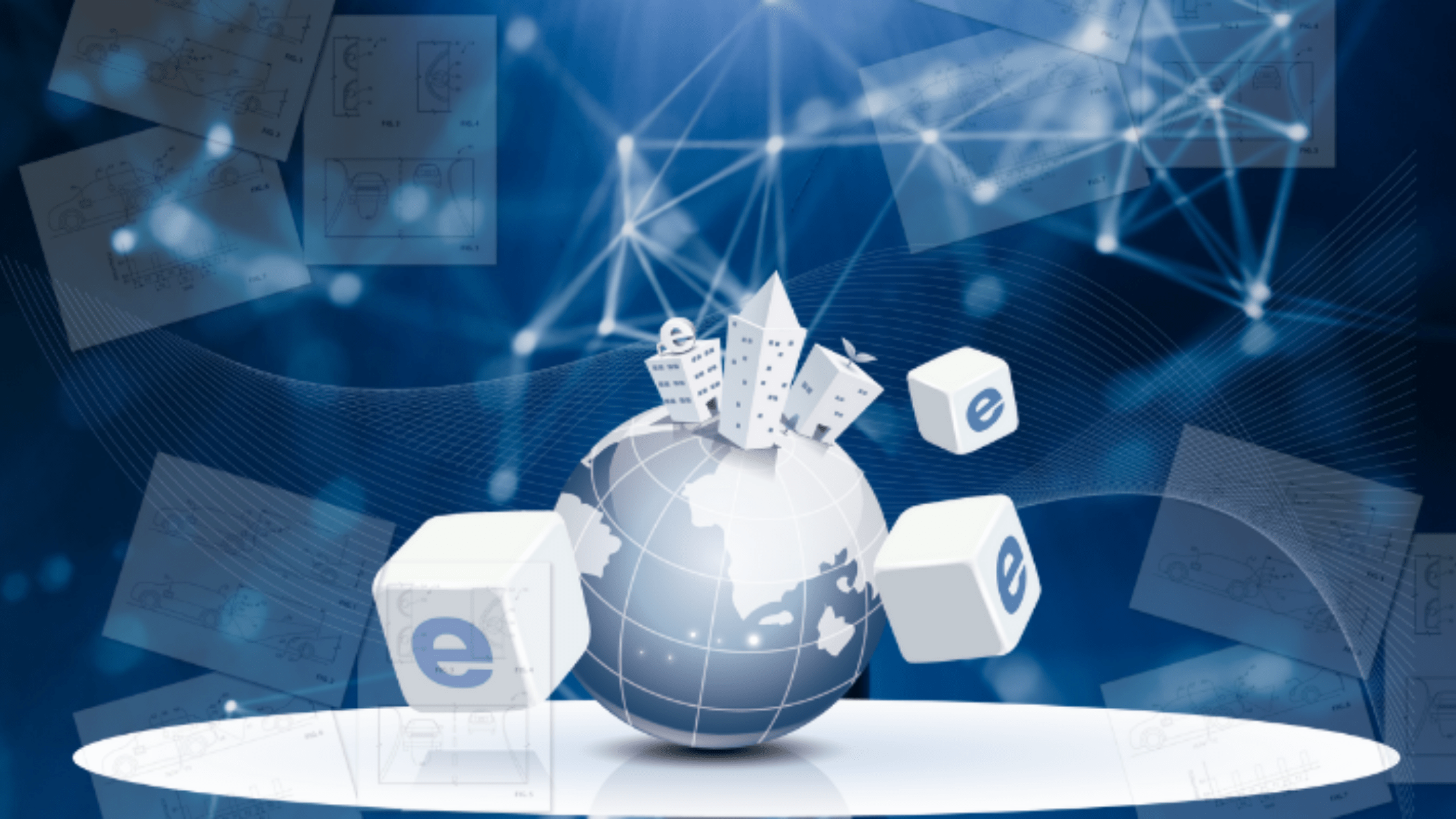 While Alan Turing, a mathematician, touched upon the concept of Artificial Intelligence (AI) in 1950 by posing a key question on whether machines can think, it was not until a couple of years later, in 1956, that the term came up for the first time at the Dartmouth Summer Research Project on AI. If we go by statistics, according to the World Intellectual Property Organization (WIPO), more than 1.6 million scientific publications concerning AI have been published so far, not to mention the patents that have been filed for close to 340,000 inventions involving AI!

But before deep-diving into the impact of AI on the patent industry, let us quickly understand what AI is and the extent to which it has seeped into our lives. AI refers to the intelligence of machines to perform certain tasks that require human intelligence. It might come as a shock to us when we realize that many of the things we use every day run on AI. Everything from digital assistants like Siri and Alexa to navigation systems in cars to smartphone apps to smart homes runs on AI! And now, with enhanced computing capabilities, AI is moving toward newer and more complicated innovations, regardless of the size of the data involved.

So, going by AI’s rapid development and implementation, it is not hard to predict that it is going to play a pivotal role in bringing about a massive change in our professional and personal lives. While we’re making great progress with AI, it is also imperative to measure its influence on the world around us. How can we do that?

One significant way to measure its impact is to look at patents filed in the United States, a prominent user of the technology, over a period of time and figure out the percentage that included AI technologies. As we all are aware, the reason behind patenting a technology is to safeguard from being used by others. Therefore, patents can serve dual purposes for us. One, tell us whether their numbers are going up. And two, whether AI technologies have found a place among different organizations, countries, inventors, and other technical areas.

Logically, the more technologies that are created, the larger will be the number of patents filed. These innumerable patent applications essentially tell us that we have a good number of inventors, not to mention investors, who want to implement the technologies at some point. Data from the US Patent Office reveals that AI-based technologies have demonstrated this increase from 2002 to 2018. In these 16 years, AI patent applications increased from 30,000 to over 60,000, indicating a higher - than -100 % increase!

To establish the credibility of something, we rely on statistics from reliable sources such as WIPO. Therefore, let us share relevant insights and numbers from the agency that will throw more light on the impact AI has had on the patent industry worldwide.

Beginning with AI techniques, it was found that Machine Learning (ML) comprised the primary AI technique and featured in 40 % of all AI-related patents. In addition, ML continued to grow by 28 % (on average) annually in the period between 2013 to 2016. Deep Learning and Neural Networks, integral parts of ML, did their bit for the development of AI.

Second of all, among AI’s many applications, computer vision seems the dominant one. Forty-nine percent of AI-related patents featured the term. Its average growth rate was 24 % annually for the years 2013 to 2016. Although computer vision seems to feature in almost half the patents filed, let us not forget that Natural Language Processing and Speech Processing take up 14 % and 13 % of all AI-related patents respectively. Last but not least, Robotics and Control Methods aren’t very far behind and are likely to catch up soon.

As we may have shared earlier, AI has no boundaries when it comes to industries, so companies dealing with an array of products and services are using it. Thus, if we had to choose the sectors AI has found the most use in, we would narrow them down to transportation, life and medical sciences, and telecommunications. In fact, 42 % of patents concerning AI included telecoms, transportation, or life and medical sciences. However, among the three sectors, transportation fared reasonably well, accounting for 20 % of patent applications in 2006, before moving on to a third of all applications in just 10 years ( i.e., 2016)!

Since we have spent a good deal of time talking about AI and patents, it makes perfect sense to analyze some key AI patent data over the last five years and see what they have to tell us. Let us look at some graphs.

Fig 1 tells us that the years 2017 to 2019 were fairly slow in terms of AI patent publication. However, things started picking up from mid-2019 and showed a steady increase throughout 2020 (almost) and 2021. Since most of 2022 is still left, we can hope that the number of published AI-related patents continues to rise. 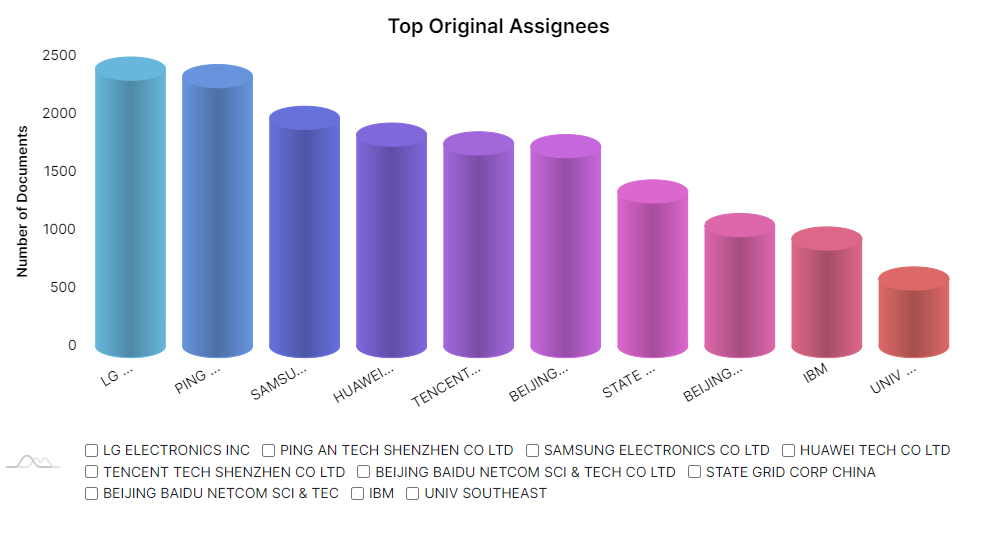 What is clear from Fig 2 is that LG, a South Korean company and Ping An Tech Shenzhen Co Ltd., a Chinese technology company are among the top two assignees, with the maximum number of AI patent documents, followed by a host of other organizations, most of which are based in China or Korea! America does find a presence here, in IBM, although the number of patents is far lower than the remaining companies. WIPO’s data tells us that among the most number of AI-related patents filed the world over, the United States and China usually take the lead, so the graphical data here should not come as a surprise!

Fig 3: Countries or patent bodies that have published the most AI-related patents (2016-2021)

Once again, the pie chart in Fig 3 tells us that China has a significant chunk, 59.2%, of AI patents published and while the US takes up second place, one can see a substantial difference in the percentage of patents published (9.6%) by them. We see much smaller percentages taken up by other Latin, North American, and Asian countries, not to mention Europe.

With such detailed discussions around AI and patents, it would not be fair to not mention Relecura, a top-notch organization dealing with custom AI tools in the IP and innovation space. While it has a range of relevant products to address varied patent-related concerns, TechTracker is a tool that stands out. It tracks the technologies of competitor companies, shares technologies owned by companies, and assesses technology trends. Visit our portal, https://relecura.com, to know more about us and what we have to offer.

Over and above the AI-related data shared so far, there are specific issues that need to be addressed to ensure that data, which is at the core of all inventions, is safe and secure. Regardless of stringent security measures, information is always susceptible to being hacked and tampered with. Depending on the level of doctoring, the question it raises is whether the invention remains fixable, or whether the changes are so damaging that you need to rethink it.

Last but not least, the fact that data includes personal information from the general public is something else that needs consideration. It is not just the amount of information we share but also how and for what purpose it is used. While the privacy of your data may be in your own hands, to some extent, companies need to be honest and upfront with what they will be doing with the information. Maybe that’s where the question of making laws to govern the extent of data that can be taken and used from people, should be given serious thought.