Leader in the Limelight 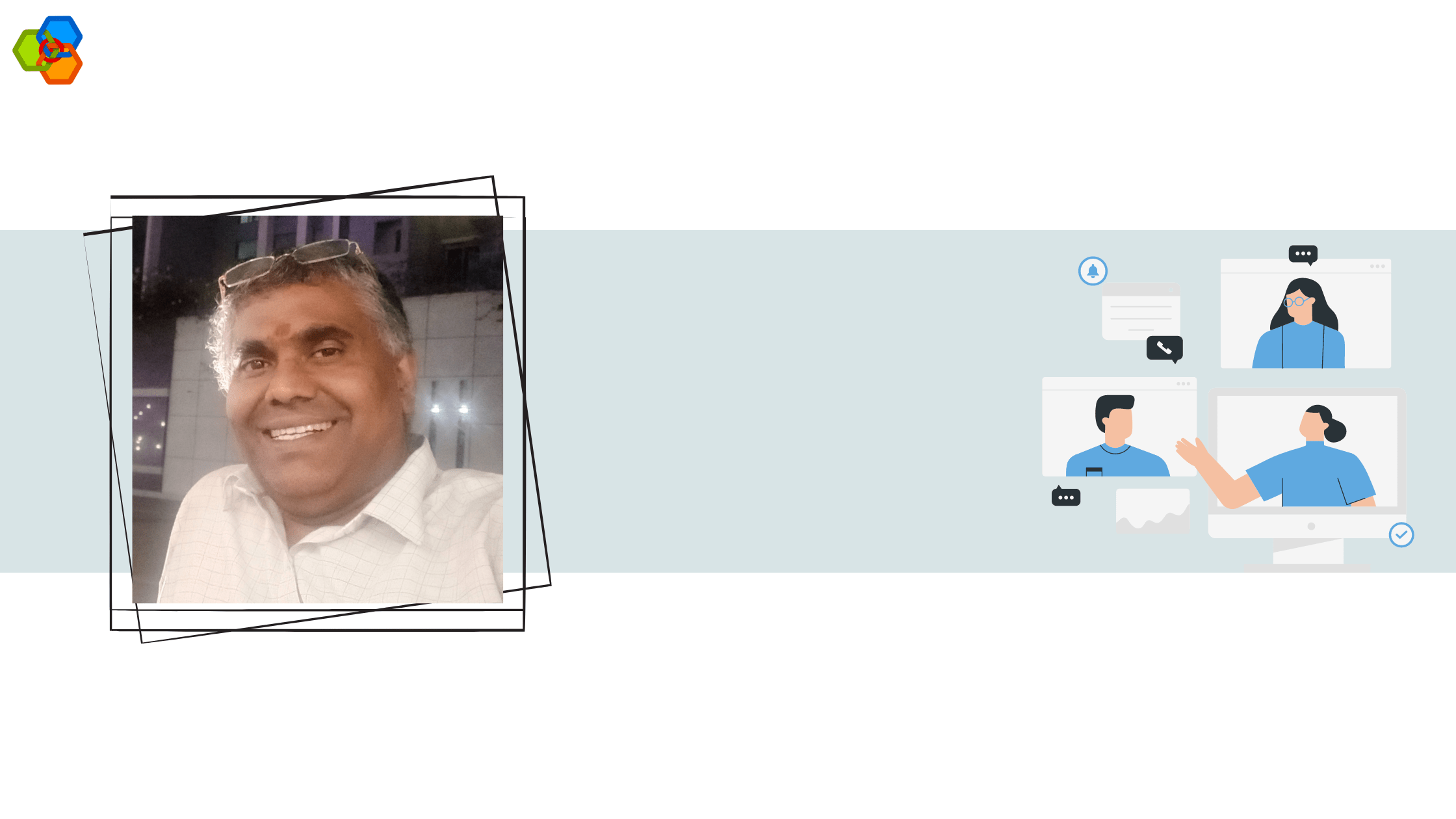 Leader in the Limelight is a series of Q&A sessions that we’ll be running over the next few months. Each session features a leader who is asked a series of questions revolving around their core area of work, their motivation, and their future plans, among other details.

For our first session, we’ve had the privilege of inviting our Head of Research, Dr. Hariharan Ramasangu, to participate.

The session was conducted by Mamata Saha, our content manager - marketing.

Here are the details of the first session.

Session 1: Leader in the Limelight

I was associated with the Flosolver Unit at National Aerospace Laboratories and was working with Dr. U. N. Sinha. Around the same time, George Koomullil, our CEO, was attempting to set up his organization, which then went by the name of IndusTech Innovations. It was through our association with Dr. U. N Sinha that we came to know each other and George approached me at one point, requesting me to join the organization in 2010. My primary area of focus was working on algorithms. The algorithms were related to Machine Learning, so I was entrusted with the task of exploring the research aspects of Machine Learning. After my stint with Industech, I moved to academics, full-time.

In terms of my main motivation to get into research, I believe it was my keen interest in Systems Theoretic view of concepts. I was fascinated by the implicit-explicit link of technologies such as ML, NLP, and AI, with Systems Theory. I wanted to explore and comprehend the underlying structure of things. In a word, I wanted to get to the bottom of how seemingly different things can have a common connection.

At a deeper level, intelligence or learning is understood by analyzing its components. In other words, divide a concept into parts and then attempt to comprehend what’s happening and why. This comprises the first aspect of learning. As far as the second aspect is concerned, it’s about building something or putting elements together and creating something new, out of combinations. For instance, if you hand over 20 Lego blocks to a child, they can create umpteen possibilities of structure out of those blocks; some may have relation to existing objects and some may be purely imaginative. In the same way, learning algorithms should have the potential to build something new.

Among technologies that are here to stay, Machine Learning is one. Causal Inference Framework is another example of a technology that will play its part in the future. In fact, without it, the synthesis aspect of learning will remain incomplete. Another concept that comes to my mind is Vague Reasoning or reasoning under partial information. When we talk about understanding something someone’s saying, people don’t usually wait to share complete information; we process whatever information is shared and draw our conclusions. However, the decision-making process is largely dependent not only on the processing of information shared but also on the potential to change adaptively. It is this vague reasoning element that needs to be incorporated into AI algorithms. Last but not least, Reinforcement Learning is another technical area that will play a big role in the future. Ideally, Reinforcement Learning should be coupled with Vague Reasoning and causal models to handle the reasoning under partial information aspect. This concept could even form a core element of AI in the future.

All the tools Relecura has designed so far have many novel and unique features. So, I’d say that the company has come a long way since its inception in 2009. At the same time, I’d also like to add that Relecura has the potential to do much more provided it addresses scalability challenges. The biggest roadblock in ramping up scalability is the requirement for additional computational and human resources, not to mention time and money. Once this roadblock is removed, Relecura will be able to build a bigger and more extensive repository of tools for its loyal and prospective customers to have access to.

I believe one of Relecura’s biggest strengths is its work culture. Each team, whether it’s R&D, Marketing, or Engineering, comprises two to three members. So, whenever there’s a need for discussion on a topic of interest or just brainstorming ideas, they can get on a call right away and talk to one another. Members are easily approachable and such interactions increase the possibilities for communication and exchange of thoughts and ideas. Discussions among members may subsequently lead to collaborations and working on a range of projects. They also help create a rapport among employees that can lead to meaningful work relationships.

For instance, let’s consider a department or a lab of an academic institution, which comprises seven to eight Ph.D scholars. They are each assigned an advisor who they interact with for their work. Under normal circumstances, you may never find them talking to each other. However, seminars or workshops can bring such people together and create opportunities for them to interact, thereby forging work relationships. A workforce consisting of four to five people in each team works best, which is why Relecura’s teams are able to work together cohesively; a bigger team size may prove detrimental to the culture of the company. It is necessary to identify different tasks and small groups to maintain this ecosystem. I am reminded of Schumacher’s ‘Small is Beautiful’ book.

Something else that stands out about the company is George’s (the CEO) involvement in all that we do. It’s not just about keeping stock of things but also sharing ideas that may not have occurred to others. In the end, it helps break the ice among team members and forge bonds.

If we talk about the areas of opportunity, more sessions that focus on the discussion of a particular technical, mathematical or computational topic, or anything that leads to exchange and generation of ideas among employees of the company, should be encouraged. We made an effort to run similar sessions with my team for a while, although hard deadlines from clients acted as a roadblock. So, it was challenging to maintain regularity in these sessions. In a word, such sessions will help employees get more exposure and extensive knowledge of the existence of things will make their (and everyone’s) existence richer and more fulfilling.

Music, movies, and reading are three things that keep me occupied in my spare time.

In terms of the kind of music I like to listen to, it’s not confined to any one genre, but includes several, such as classical, western, and Carnatic. I love to listen to the songs composed by music directors Illaiyaraja, S.D Burman, Khayyam, and Naushad, to name a few. Language is also not a barrier for me so I listen to songs in Hindi, Tamil, Malayalam, and Kannada, among others.

In terms of movies, some of my go-to foreign film directors include Italian director Luchino Visconti, Swedish director Ingmar Bergman, and Hong Kong-based film director Wong Kar-wai. Indian film directors include Mahendran, Balu Mahendra, Satyajit Ray, G. Aravindan, Adoor Gopalakrishnan, G.V.Iyer, etc. Like music, I’m interested more in the film-making process, so the movie genre or language is of no consequence to me.

Finally, if I were to talk about reading, I have a list of authors whose books I look for, starting with Vladimir Nabokov, one of the greatest prose writers of the 20th century. Then there’s Vikram Seth, Salman Rushdie, Bertrand Russell, and Laa. Sa. Ramamirtham (Tamil author). Both fiction and non-fiction work for me because I prefer reading all kinds of books. I am presently reading the writings of Joseph Campbell and Susan Sontag.

Last but not least, any artistic creation that has classic elegance, expressive beauty, and potentiality to touch our beings is very close to my heart.