Researcher’s dilemma: Publish or perish, or patent and flourish? 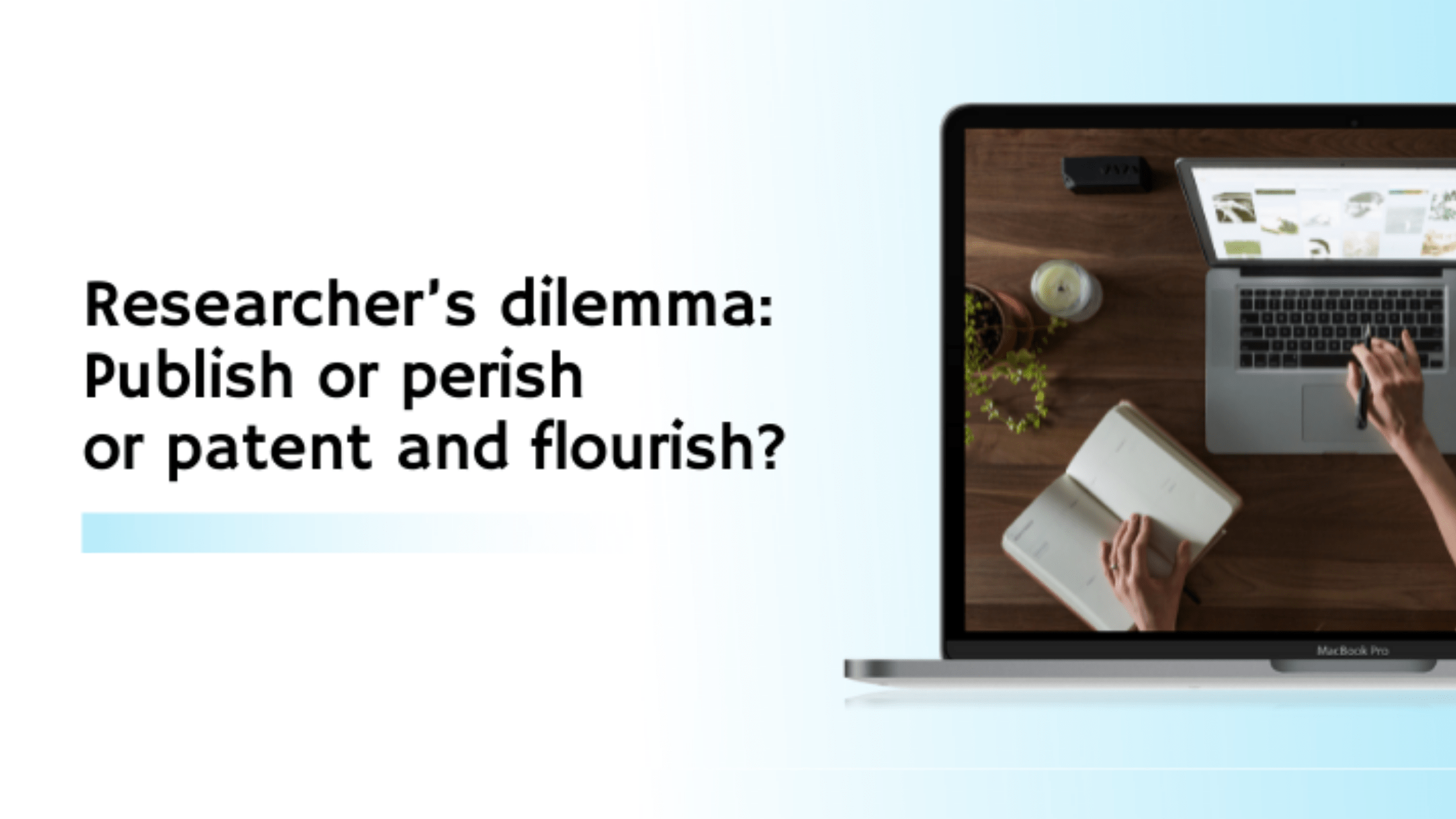 The fruit of the endeavors of the academic researchers will continue to shadow them for the rest of their lives in more ways than one. Certainly, research claims the most vital time segment of their life and lays the foundation of their future and career. Given the quantity of work involved, midnight oil burnt, ineffable angst they are subjected to, the hidden silver linings that oft give the slip in the heaps of data generated, and the kind of dedication and single point commitment called for, academic research pursuit is a stupendous deal generally taken up immediately after post-graduation, even before getting some industrial seasoning and case hardening. Thus, the fruit of their perseverance means a great deal to them and is often at a loss as to how to deal with the same.

The key dictum in the academic research circles is to publish or perish. Peer-reviewed papers and proper visibility in the global fraternity of fellow researchers are important indeed. The copyright protection that publication entails under the Copyright Act shields the researchers from the plagiarist ‘cutthroat bandits on the paths of fame.’ Or he could present his findings as a paper presented at a conference proceeding. In fact, published papers are a mandatory requirement towards a doctoral degree and the candidates are pressured to flaunt an impressive number of publications to substantiate their claim. However, copyright does not necessarily barricade the researcher from being taken for a ride. It does not effectively stop others from reproducing the results from published works and capitalizing on them in simple commercial or monetary terms.

The prospect of patenting the inventions is yet to percolate the collective psyche of the academic community in many parts of the world, especially in the emerging economies. Generally, the researcher stumbles on patentability prospects at the end of his/her pursuit, and it had not been a resolute objective when he embarked upon it. Here the classical dilemma pops up, whether to patent or publish. One cannot take to both roads at the same time. But the promising side of the whole picture is that copyright and patent are not mutually exclusive. Only the sequencing is important. A patentable claim has to be novel, non-obvious, and significant from an industrial perspective. So, publishing an invention is tantamount to shooting in the foot for a myopic gain. A published paper in the public domain sabotages the novelty claim forthwith. Without proper patent rights in place, it is not practically possible to keep others from misusing your inventions to enrich their private coffers at your expense, for a period of twenty years or so. And naivety is a patent quality of many a research greenhorn. This is a treacherous slough to tread though. If you go in for patenting with half-baked findings, where further studies and efforts are wanting to arrive at the final results, the hurried patent route can prove to be detrimental.

The best strategy is to go in for patenting first, sticking to the confidentiality of the result until it is safe to go public, especially if the finding has a fairly high commercial value. This stratification has multipronged benefits. When patenting is very much on the cards, the researcher will have to choose a topic that is original, whose veracity could be instantly substantiated with the support of a smart AI-powered Analytical tool, Novelty hosted by Relecura. This on-time precautionary step helps the scholar steer his pursuit without encroaching upon the already targeted areas. Steering clear of duplication is a vital constraint while traversing the innovation minefields. This essential ground preparation is necessary when a patent is on the cards. A patent should not be a casualty at the exit point; it has to be an integral part of the game plan from the outset.

In addition to Novelty, the instant patentability screening AI-powered tool, literature survey could be perfectly fine-tuned, weeding away the distracting noise, by seeking the support of innovative tools like TechExplorer, which is a foolproof platform to zero in on the right patent and non-patent literature, helping the scholar chart out a roadmap, which is genuinely novel and original. In the default scheme of things, patent literature evades the radar of the scholar. It is high time that the academic community gravitated more towards patent literature, marking a break from the stymied past. This is more important to the universities in countries like India known for the huge and untapped human resource potential. Universities cannot eternally survive on the breathing support in the form of public funding. Patent-oriented and patent-centric research culture is the bold step in the direction of financial self-reliance and autonomy. A mutually supportive partnership with the local industry and the university is necessary and important in this context. This alone ensures industry-specific and industry-compatible research. Fortunately, many of the mainstream universities are redefining themselves to take on the challenges of the emerging times. Every action, in the final reckoning, boils down to money in the modern business-maniac world. Patentability ought to be very much in the thick of the scheme of things in the academic research community of the emerging world more than ever.

A patenting academic culture effectively ensures an exclusive right to exclude others from monetizing the fruit of the sweat on our brow. The returns from the patents could incentivize the patenting culture on the campuses and the researchers get a fair chance to make a living on what he has invented. Still more important, patented technologies promote entrepreneurship and startup culture on the campuses and the tables are turned, so placement seekers become placement givers.

But the academic community should have the latest capabilities to fathom and realize the star rating of an invention they are braced to go to the market with. That said, it is also important to identify the right market too. Underselling, distress sales and bootless forays wasting precious time are some of the deterrents which undermine a patient-oriented academic culture. In this context, the latest AI-powered custom tools in the market, such as the Relecura Platform, come handy. Such platforms help universities identify original patentable topics, their right markets, potential licensees, and the rating of the invention at hand. It is high time that all the universities had access to such a smart AI-powered platform to finetune the internal research pursuits in a patentable direction accruing reasonable revenue.

To try out such a platform having remarkable competitive edge do contact support@relecura.com