The frontrunners in the innovation race 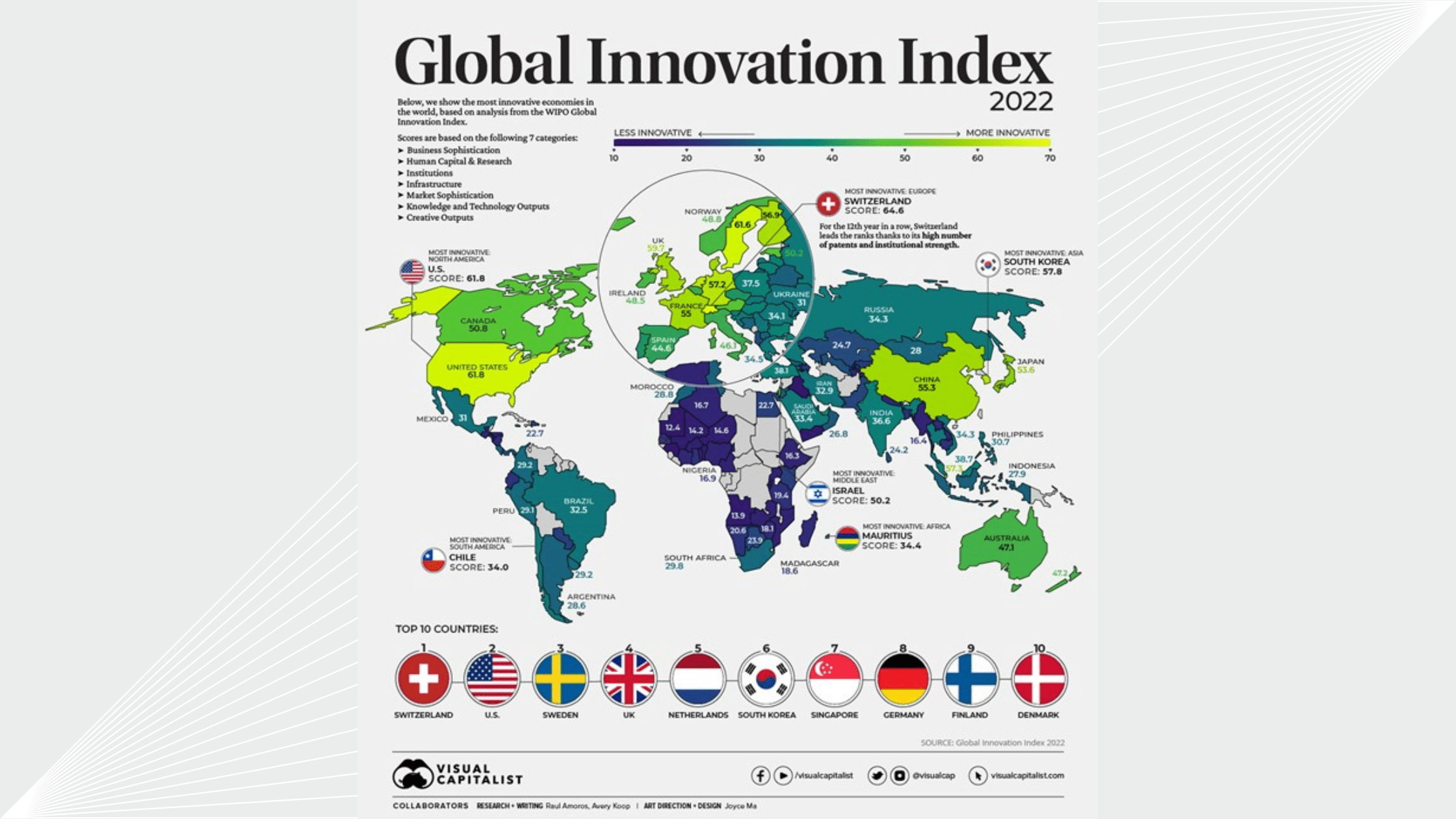 The progression of human civilization is punctuated by landmark and game-changing innovations. Innovative ideas in warfare, exploration, farming and production activities, logistics, health care and infrastructure have transformed the destiny of many a civilization in the old times. In the modern times, any innovation in any part of the world will have its ripple effect in the rest of the world. It is interesting that there are many things common to the most innovative countries in the world.

A recent article authored by Dorothy Neufeld published on 15th December 2022 has identified the most innovative countries in the world (Innovation index: https://www.visualcapitalist.com/most-innovative-countries-2022/) based on data from the UN’s WIPO Global Innovation Index. Though quantification of innovativeness is a delicate and tricky process, the author accomplished the mission with the help of seven different parameters; namely Business Sophistication, Market Sophistication, Infrastructure, Human Capital & Research, Institutions, Creative outputs, and Knowledge and Technology Outputs. The study was carried out with respect to 81 separators coming under the above parameters.

Global Innovation Index is a concept difficult to deal with and quality. Thet above study is a pioneering essay in that direction.

Major thrust areas of innovation and tremendous investment are obviously the newly fanged technological highways of digital technology and electronics.

The analysis showed that the most innovative countries in the world are all the higher latitudes of the northern hemisphere. The top ranking countries on a scale of 10 to 70, Switzerland (64.6), the US (61.8), Sweden 61.6) and the UK (59.7) have thriving market economies and are largely peopled by the Nordic nations. The next in line are the Netherlands, South Korea, Singapore, Germany, Finland, and Denmark. Here two countries that are outside of the above pattern are South Korea and Singapore. The people of the far east, in counties like Korea, Singapore, Japan, and China, are intellectually, institutionally and economically capable of springing a surprise. As of now the Teutonic western world and the Far East head the global engine of innovations.

Other countries that bagged scores between 50 and 60 include France, Austria and Estonia which belong to the contiguous northwestern European region.  The countries that scored between 40 and 50 are Ireland, Italy, Spain, Australia, New Zealand, Norway, and Belgium, Iceland, Portugal, Malta and Cypress. Here, in addition to Teutonic nations, Latin nations also have a strong presence.

Africa still remains at the tail end of the locomotive, even the north African countries on the Mediterranean are training far behind in the innovation spectrum.  Only Israel fared well in the Middle East, but for all practical purposes, Israel is at par with a developed western nation and most of the people have their roots in the West. The immensely rich oil exporting countries in west Asia do not fare well, in terms of innovation. For example, Kuwait one of the richest counties on earth, is one of the lowest ranked countries. In Asia, apart from Singapore, South Korea and Japan, the only country that ranked above 50 is China. Given the momentum of progress, the four major industrial economies of the Far East and the traditionally well entrenched Teutonic western world would excel as the bipolar world of global innovations. The huge geographical region of south and central America did not fare well in the mapping. Chile, with 34 points, leads South America. And interestingly Chile is the most westernized South American country in the far south. Mauritius with 34.4 points, is the leader in Africa and its population is not African! In North America and the US is the forerunner with 61 points and Canada, the powerful neighbor to the north got 50.8 points. Whereas in Europe, Switzerland leads the world with 64.6 points. Central and eastern Europe, west central, south and South east Asia are almost on the same page, except for Singapore which has a sizeable Chinese population.  In Europe the lowest rank holder is Albania and Albania has a largely non-European mindset.

The study shows that the money earmarked for research and development has multiplied three-fold over the past two decades to $2.4 trillion. In the second half of the 20th century, a lion share of the funds in R&D was from the US and in the present century, there is a marked deviation from that pattern. Major universities, huge corporations and industry-university partnerships in different parts of the world have become the new normal. In order to maintain a competitive edge, R&D is a vital component. Money spent of R&D is a direct indicator of the optimism and upbeat outlook of an organization.  In the investment in R&D global corporates played a significant role indeed. Four of the five highest spending companies in R&D are in the US, Amazon, Alphabet, Microsoft and Apple and the US alone accounts for $700 billion, leading the rest of the world.

South Korea, a fairly small country which has hardly emerged from the shadows of a protected fratricidal war has brilliantly proved what it is capable of. The country gets an impressive position largely because of the bold initiatives by the flagship companies of South Korea, particularly Samsung and LG.

The writing on the wall is pretty clear and eloquent. GDP or per capita income of a  country does not necessarily reflect in the IPR assets of a country. The oil rich countries, despite having huge amounts of resources at their disposal, are only begun to make a difference. Countries still basking in the shadow of Medievalism, like many countries of Asia and the Middle East, are yet to imbibe a competitive scientific temper. High literacy or HDI does not necessarily lead to a conducive environment for innovation. A synergy of highly competitive industry and a strong entrepreneurial environment are also vital for completing the vital recipe. It is self-evident from the fact that all the high-performing counties have a galaxy of corporations to flaunt. The vital mutually supportive partnership between industry and universities is not yet developed in many of the lagging countries. Focused and result orient technological research is another area of laxity in the poor economies. The dynamic and intelligent nations of the Far East were ready to be catapulted to the front line, as soon as they were exposed to the western enlightenment. But the traditional industrial economies of the west still continue to lead the show, as they are the direct descendants of industrial and social enlightenment. Market economies (China included) with competitive conglomerates and vibrant universities, will continue to lead the world with path-breaking technological surprises.  And profit will continue to be the major driving force. And profit will continue to be the major driving force.